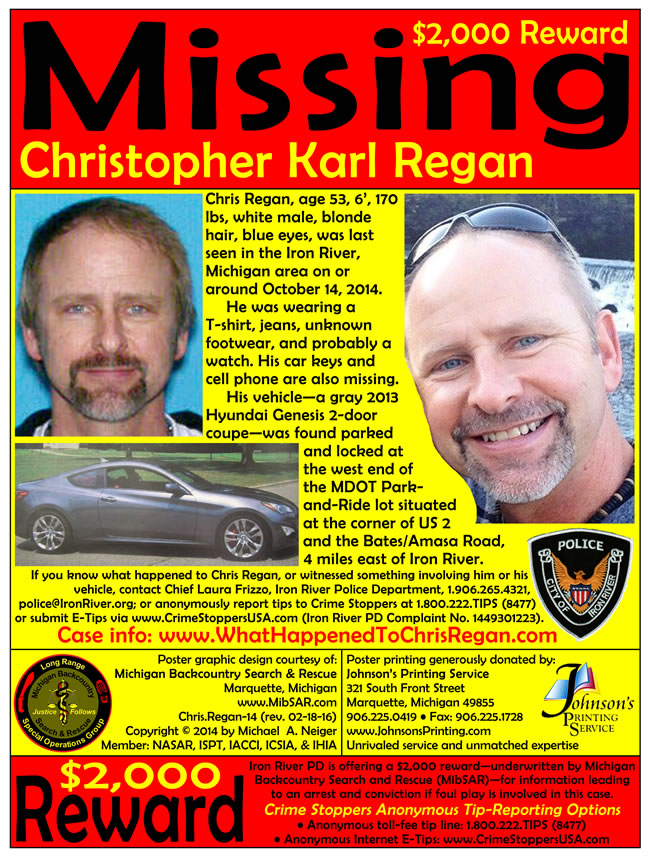 October 2014 – Iron River, Michigan
Chris Regan was finally breaking free from the little crime-ridden town of Iron River. Nestled amongst the vast forest lands and scenic lakes, it looked like a perfect place for an outdoors enthusiast like Regan. He worked at a local manufacturing company and there he met Kelly Cochran. After a while, the two would hook up at his apartment after work. Friends say he wasn’t “dating” Cochran and it was more about sex. They never ventured beyond Regan’s place. Small town gossip could be problematic, especially when Cochran was a married woman.

Chris Regan was an Air Force veteran with a weak knee. His job required him to stand all day and it was beginning to take a toll on his injury. In October, Chris landed a job in Ashville, North Carolina. He put in his two-week notice at work and was preparing to move. He was finally breaking out of this small town, but he wouldn’t escape. Regan had stepped into the grasp of a sadistic predator.

Just before leaving the state, Kelly Cochran invites Regan to meet at her house. He hadn’t been there before, so he had to jot down directions to find the place. Investigators would find this note in Regan’s abandoned vehicle a few days later. Before meeting up with Kelly, Regan made plans with a friend to have dinner on Saturday night. This friend would eventually be the one to file a missing person’s report when Chris Regan disappeared.

The rumor mill supplied investigators with the name of Chris Regan’s lover and investigators immediately visited the Cochran home. They note the strange behaviors of both Kelly Cochran and her husband Jason and proceed to request a search warrant for the home. Before this could be done, the Cochran couple left town leaving most of their possessions in the house. The house was a disastrous mess, but amazingly there weren’t many clues. If Chris Regan was murdered in that house, there wasn’t much left to go on.
While Iron River Investigators struggled to find the evidence needed to tie Kelly and Jason to the murder of Chris Regan, the Cochran couple were living in Hobart Indiana.

Two years would pass, and it looked like the case wouldn’t be solved, but then Iron River Investigators hear the news that would ultimately solve their own case. Kelly Cochran had been arrested in Indiana for killing her husband. That’s right. She murdered her husband by giving him an overdose of heroin and then suffocating him. She confessed to everything during a 70-hr interview with the Indiana police.

“I hated my husband because he took the best thing in my life,” Kelly told investigators. “It was revenge for Chris Regan.”

During the interview, the gruesome details of Chris Regan’s murder were discovered. Kelly had lured Chris to her house for sex and lasagna. After having sex with him, she walks him to the stairwell and positions him perfectly at the top. There Jason Cochran ambushed Regan shooting him in the back of the head with a long barreled .22 rifle. The couple pulled Regan’s lifeless body to the basement where everything had been covered in plastic. There they took an electric saw and mutilated the body and stuffed it into trash bags. They shoved Chris Regan into the trunk of his own car and drove him out to the woods and scattered his remains before leaving his car at a local Park & Ride.
If all of that weren’t bad enough, here is where the story takes a hideous turn. Years earlier Kelly and Jason had taken a blood oath. If either one of them had an affair, they were required to kill the lover. To make matters even worse, it would come out in a jailhouse phone call that Kelly may have killed 9 – 20 more men across four states over the years. These names haven’t been released to the public. If all of that wasn’t enough to make you sick to your stomach, one other tidbit would come out in Investigation Discovery’s new docu-series “Dead North.”
The Cochran couple hosted a neighborhood BBQ a few days after Chris Regan’s disappearance and some of the burgers didn’t come from a cow. For more information on this case check out the ID Channel’s docuseries “Dead North.”