A single mom goes out for a much-needed break one Saturday night in the rural town of Sedalia, MO. She meets a good ole’ boy in a red Ford truck and decides to ask the sitter to stay the night. She stops by the house just before midnight to pay the sitter’s extra fees, but never returns home. Ten years and a thousand rumors later the family is still at a loss. Where is Dana Bruce?

Dana Bruce, 23 was the mother of two young children; Dylan 4 and Destiny 2. Her mom’s night out has lasted ten years, and now her children have no recollections of their devoted mother. Their grandmother, and now legal guardian, keeps their mother’s memory alive with pictures and scrapbooks. It’s all these two children have left. Dylan is now a teenager, and it’s been reported that he reads the online reports about his mother every few weeks.

Dana had a problematic upbringing being bounced between foster homes and spending some time in a girl’s group home in Sedalia as a child. She seemed determined to give her kids a better life and tried to make something of herself, but by 23 she was still searching for Mr. Right. On the night of October 4, 2008, her search leads her to Malone’s Bar in downtown Sedalia. Video surveillance last records her around 11:30 pm. A short time later she is seen with a man driving a newer model Ford F150. Dana returns home to pay the babysitter the extra fee for agreeing to stay the night and was never seen again.

Authorities tracked down the man in the red truck and questioned him. A short time later he skipped town. He was later arrested in Georgia on possession of an illegal substance and driving on a suspended license. This man has been classed as a person of interest but hasn’t been publicly named.

Rumors abound in the small rural town, and many of them are far-fetched, but the local police assure the public that they have doggedly tracked down each one. Some locals blame her ex. Some locals believe she is underneath the concrete at the nearby Pro-Energy construction site. Police could not verify either one of these so-called leads.

If you have any information about this young mother, please contact the Sedalia Police Department. (660) 826-8100. 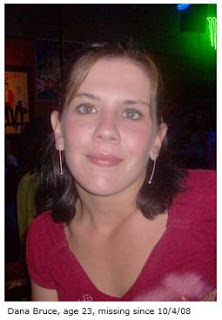