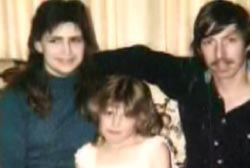 Outside a popular Mexican restaurant, nestled beneath the Yucca plant peered the hollow eyes of a human skull. The morbid sight caused two customers to call over the manager who quickly phoned the police. A nearby cemetery was being relocated at the time, so the skull was placed on a shelf in the mortuary and nearly forgotten until an anonymous letter arrived at the Vinita Park Police Department a year later.

Who was the anonymous tipster? Why was Linda Sherman’s skull strategically placed in front of her husband’s favorite drinking spot? Was it to intimidate him, or was it because he couldn’t remarry since she hadn’t been officially declared dead?

This fateful tale began a decade earlier with the marriage of two high school sweethearts. Linda Lutz and Don Sherman decided to marry after Linda became pregnant. Neither teenager had graduated high school, but both were determined to make it work. Don graduated a few months later and went to work at a gas station to help provide for his family. Linda gave birth to a baby girl during summer vacation that year and named the child Patty. When the fall semester rolled around, Linda was back in school determined to complete her senior year. The couple rented a house next door to Linda’s parents, and Patty stayed with Linda’s mother. Life was difficult, but the couple seemed to be happy in the first few years.

Between the strain of young love, parenthood, and financial woes the couple’s relationship quickly became toxic. Linda repeatedly left Don and took their daughter only to reconcile a short time later. Linda even went as far as to file for divorce once, just to then call it off. At one point Linda got a restraining order taken out against her husband claiming he was mentally unstable. Somehow, Don always found a way back into his wife’s good graces, and life moved on. Things would take a drastic turn in the spring of 1985 however.

The couple worked opposite shifts, and Don became increasingly paranoid about his wife’s activities. Her brother, Dennis reported his brother-in-law was obsessed with Linda’s every move. A short time before her disappearance, Don claimed to have seen Linda at a restaurant with a male coworker and another female. Was this a casual lunch with two coworkers, or was she cheating on him? No one would ever know for sure because Linda filed for divorce again. Eleven days later she would disappear altogether.

On April 22, 1985, Linda arrived home around 2:15 am from her night job. Don claims they had a discussion about her late arrival before she fell asleep on the couch. Early the next morning, Don takes their 9-yr-old daughter Patty to school. Patty recalls this was very odd because her mom always dropped her off at school. Patty told Unsolved Mysteries that her mother was still on the couch facing the back. The thought it was strange when her mother didn’t get up and kiss her goodbye. The child had no way of knowing that she would never see her mother again.

Don claims he returned home later that evening around 6 pm to find Linda in a panic because she was running late for work. She took off in her ’71 Volkswagon Beetle in a hurry. Linda never reported to work that evening, and after prodding by the family, Don files a missing persons’ report two days later. He claims his wife had left him again and said an overnight bag was missing from the house. While Linda had left him before, there was one major difference this time around. Linda always took Patty with her. This time Patty was left behind with her father.

Four days later, Linda’s Volkswagon Bug was found abandoned at the St. Louis Lambert Airport. The doors were locked, and some of her belongings were inside. The police opened the unlocked trunk half expecting to find the missing woman inside, but she wasn’t there. Five years passed without any movement on the case. It looked like Linda was lost forever.

June 28, 1990, two TSA workers were having lunch at the popular Casa Gallardo restaurant near the airport when one of the women noticed an eerie gaze peering out from under the well-manicured sidewalk area. There between the gravel and Yucca plants were the hollow eyes of a human skull. The restaurant manager quickly called the police, and soon the place was swarming with crime scene investigators. Coincidently, the nearby graveyard was being relocated to expand the airport at this time, and investigators thought this could be a prank. The Bridgeton P.D. checked their missing persons’ reports and didn’t have a missing female, so they simply placed the skull on a shelf at the mortuary.

A year later the Vinita Park Police Department received an anonymous unsealed letter. It contained one sentence stamped in purple ink. There were no fingerprints and no DNA. It read, “The Bridgeton P.D. has L. Sherman’s skull.” This sentence had been stamped on the back of a flyer for the Casa Gallardo restaurant.

The investigators were skeptical at first. How could a police department ten miles away have Linda’s skull and they not know about it? All skepticism flew out the window however when they made the phone call and found out the truth. Ten days later the skull would be identified as Linda Sherman’s using dental records.

Police suspicion had always been on the husband, but now it was falling harder on Don’s shoulders. To make matters worse, the Casa Gallardo was one of Don’s favorite drinking spots. He visited the restaurant at least twice a week and had even been there the night the skull was found. Could this be a coincidence or was someone trying to taunt the man?

Don gave the police several different theories as to his wife’s disappearance and demise. First, he claimed she had run off with another man and abandoned her child. Then, he claimed she had gotten mixed up in drugs, and someone killed her because she knew too much. None of Don’s theories held weight with the authorities, and although several sites claim he has been cleared as a suspect, I could not find evidence of this. When the police chief was interviewed for Unsolved Mysteries, he clearly stated that Don Sherman was the one suspect that he could not clear. Even Patty believes her father killed her mother.

Strange fact about Don Sherman: While it has no official bearing on the case, just before Don’s marriage to Linda Don’s mother was convicted of shooting and killing Don’s father. Could this violence have damaged Don psychologically and caused him to be abusive to Linda? Who knows?

After watching the Unsolved Mysteries episode, I found one thing strange about the interview with Don Sherman. Every time he mentions Linda he refers to her full name. Who calls their deceased wife by her full name as if talking about a stranger?

The official theory: Don killed his wife when he found out she had filed for divorce again. When Patty saw her mother on the couch, she was already dead. He takes Patty to school, disposes of his wife and continues. Five years later, he isn’t granted a divorce because Linda hasn’t officially been declared dead. Suddenly, her skull shows up outside his favorite drinking hole. When the investigators don’t connect the dots, an anonymous letter arrives at the police station.

An ex-girlfriend claims Don admitted to her that he had killed Linda, but there wasn’t enough evidence to prove it. Police Chief Michael Webb spent his career chasing leads in this case but died in 2009 never knowing what happened to Linda Sherman. His son said it has become a family obsession and hopes it will be solved one day. Don died in 2015, and Linda’s brother Dennis died in 2016. It would seem this mystery will outlive the participants. Where is Linda’s body? What happened to this young mother?

Don’t forget to sign up for Synova’s Weekly True Crime Newsletter & get her Grim Justice ebook for FREE!

One thought on “The Hollow Gaze – The Linda Sherman Mystery”