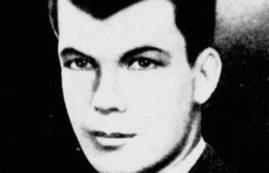 Roland T. Owen walked into the Kansas City hotel carrying a comb, a brush, and a tube of toothpaste. After several strange encounters with hotel staff, Owen would be carried out on a gurney a few days later. Blood covered the walls and bed in room 1046, and investigators say it was already solidified leading them to assume Owen had been bleeding for over six hours. Who tortured and killed this man? Why was his door always locked from the outside? Who were the anonymous benefactors that paid for his burial?

Last week I quickly highlighted this Alfred Hitchcock style murder mystery for my readers. This story was so strange and mysterious; I knew it would take more than one post to cover it. If you haven’t seen that post, you can follow this link to read Part One of the mystery.

Robert Lane was driving down 13th Street when he saw a man dressed in trousers and an undershirt. The man’s attire seemed strange in the cold winter weather of January. He was running and waving frantically. Robert Lane pulled over, and the stranger ran up to the door. He looked surprised.

“I’m sorry. I thought this was a taxi. Can you take me to where I can find a cab?”

Lane agreed, and the man climbed into his back seat. The man looked as if he’d been in a scuffle and Lane made a remark about this. The man mumbled, “I’ll kill that__________ in the morning.”

While all the newspapers were too proper to write the actual word that was uttered, 84 years later it could have helped investigators if there was some sort of record of this remark. Was the stranger talking about a male or a female? Who knows?

Lane noticed the man had a large cut down his arm and was cupping his hands trying to catch the blood. As the car reached a nearby intersection, the passenger jumped out and ran across to a parked cab. Seeing the driver wasn’t with his car, the stranger honked the horn. Presently, the cab driver rushed out of a nearby, and that was the end of Robert Lane’s interaction with the stranger.

Police disputed this story since no one noticed Owen leaving his room. Police would discount this and take the investigation in different directions. I find this odd because no one ever saw Owen coming or going from his room. Who was locking the door from the outside if Owen was still sitting inside? At one point the housekeeping staff walked into the room thinking it was empty to find Owen laying across the bed fully clothed and staring into the darkness.

To understand this story, you must understand the hotel’s door locking mechanism. The door could be locked from the inside and could not be opened externally. It could also be locked from the outside with a key, and the hotel staff could use the passkey to open the door and clean. On more than one occasion this outer lock was used while Owen was still inside the room.

By Friday morning the staff noticed the phone was off the hook in Owen’s room. The first contact that was made by the hotel staff was around 7 am. Evidence would later show that Owen was already beaten, stabbed and bloody by this time. That’s when the bellboy heard a voice call through the door and say, “Come in. Turn on the light.” Was this Owen trying to get the man to come in and help him? We’ll never know.

To make the story, even more, perplexing the second time a bell boy was sent to the room that morning, he opened the door with the hotel passkey. This, of course, means that between the bell boy’s first contact and second contact someone had left that room and locked it from the outside. The attendant used his key and opened the darkened room. He noticed the side table was knocked over, and the phone was on the floor. A shadowy figure of a naked man lay sprawled across the bed. The bellboy would later note that there were dark shadows on the sheets around the man, but he didn’t turn on the light. Instead, the bellboy replaced the phone, closed the door, and reported that the guest was drunk on the bed. Could this man have saved Ronald T. Owen if he had taken a moment to check on him?

An hour and a half later the phone was still off the hook, and finally, the bellboy had lost his patience. He opened the door and switched on the lights to discover a horrific scene. Owen was two foot from the door and naked with a rope tied around his neck, wrists, and ankles. He was on his knees and elbows. His bloody head was in his hands. When police asked who did this Owen replied, “Nobody.” He would slip into a coma on the way to the hospital and die shortly after midnight on January 5th.

The police immediately began searching for evidence in Room 1046 but found it had been stripped. Owen’s clothes, all of his belongings, even the hotel’s shampoo and soap were missing. The only things found in the room were: a hairpin, a safety pin, a label from a tie, a bottle of undiluted sulfuric acid, and two glasses. One broken glass was in the bathroom sink and was missing a shard of glass. Four little fingerprints were found on the lampshade leading the investigators to believe they could have been from a woman.

Investigators quickly realized the name Roland T. Owen was an alias and began digging for the man’s identity. In the meantime, the body was transported to the local morgue where it was placed for public viewing in hopes of getting a definite identification on the man. Many people came forward thinking they knew the victim, but all were dismissed. This is when Robert Lane came forward and confirmed the man in the morgue was the man he had picked up on that Thursday night. Authorities claim they can’t prove this, but I find it the most credible. Owen didn’t look overly normal. With his height and scars, he was a rather imposing figure which would make him hard to forget.

After much ado, the papers announced the unknown victim with the alias Roland Owen would be buried in a pauper’s grave since no one claimed him. This prompted another series of strange events. Before the body could be buried the funeral director received an anonymous call from an unknown male. He asked them two wait a little longer in burying Owen and he would send money for a proper burial. A few days later the funeral home received an envelope filled with cash wrapped in newspaper. The donor requested the body to be buried in Memorial Park Cemetary so he could be next to the donor’s sister.

The florist received an anonymous phone call around the same time from an unknown male. He requested 13 roses to be sent to the grave of Ronald T. Owen and the card should be signed, “Love forever, Louise.” The florist tried to ask a few questions, but the man simply stated that he was just doing this for his sister.

After the newspaper article about this case was printed, the editor received a phone call from a woman. She said the report was wrong and Roland’s funeral arrangements were paid.

During one of the interchanges with the hotel staff, Owen was heard speaking on the phone to a man he called “Don.” Another time the housekeeper saw a note with the same name. Was Don a friend? Was he a Mafia Don? Investigators searched for years and couldn’t find the true identity of Don.

Eighteen months after the newspaper article about this mystery a woman saw the pictures and claimed Roland T. Owen was her son Artemus Ogletree. Although original reports claimed he was in his mid-20’s, Ogletree was 17 at the time of his death. To make matters more mysterious, Mrs. Ogletree had received three separate letters from her son. They were all typewritten which she thought was strange since her son didn’t know how to type. Also, these notes used a lot of slang terms Mrs. Ogletree had never heard her son use. After researching this story, she realized those three letters could not have been from her son. Someone out there not only knew what happened Roland T. Owen in that hotel room, but they also knew his real name and his mother’s address.

If that wasn’t enough of a mystery for you, there was a new chapter to this tale that happened to a Kansas City Librarian in 2003. John Horner spent a lot of time researching this case and writing it up for the library’s blog. One day he too received a strange phone call. It was an out of state caller claiming to be going through a deceased relative’s belongings. They found a large box of newspaper articles from about the Roland T. Owen case and in the box was a specific object that had been referenced in the original newspaper article. Then, the line went dead. What was in the box? Who were the mysterious caller and their relative? Was it the woman Louise? Was it Don? Like all good mysteries. We may never know the truth in this strange tale.

Despite spreading this case across two blog posts, there are even more details I couldn’t include here. Below are some links for further reading on this strange tale.