We all know the tale of a killer posing as granny so he could snatch Little Red Riding Hood. After nearly 44 years many locals have forgotten the case of the beautiful little red-headed child coming home from grandma’s house. Like her fairytale counterpart, Shirley Jane Rose would be snatched by a predator. Who killed this precious child?

Shirley Jane Rose, 9, was walking the four blocks home from grandma’s house on Friday, October 17, 1975. It was a path she had walked hundreds of times before. Springfield, Missouri was a safe town. She didn’t know anything about the evils of the drug trade, or that a man would snatch her up on her way home.

Witnesses saw the child talking to a male in a blue car. The car has been described as a ’69-’70 Chevy or a 72 Ford Torino, but neither story could be verified. Shirley’s body would be found two months later buried in a shallow grave by McDaniel lake.

In 1982, a judge came forward claiming a client gave him information on this case. While working as an attorney, this anonymous client told him the details about this poor girl’s final moments. It is unclear if the client was the actual killer because the client was on his or her deathbed and wanted the information released when they died.

The judge wrote an open letter to the killer, and it was published in the local paper. He described how the poor child was stolen with the idea of trading her for drugs, but the killer got scared by the immediate response by law enforcement and decided to kill her. The monster took the child to the lake and made her watch while he dug her grave. He told her that it was for her and then strangled her with a shirt. 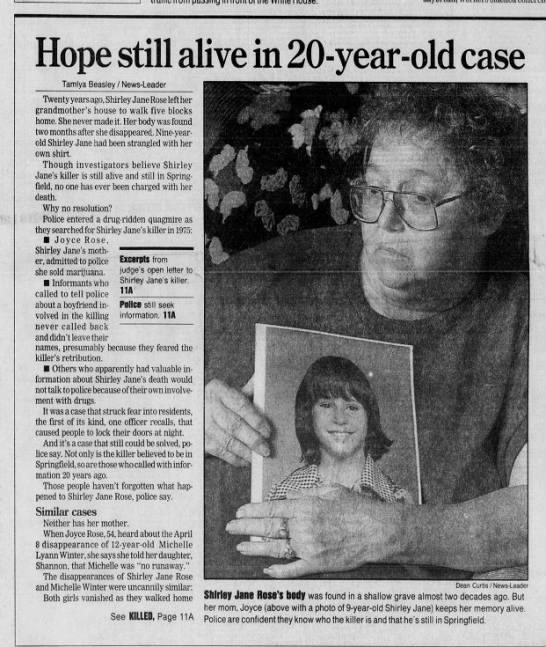 If you have any information on this case, please contact the Springfield Crimestoppers at (417) 869-TIPS

Don’t forget to sign up for Synova’s Weekly True Crime Newsletter and receive her Grim Justice ebook as a gift.