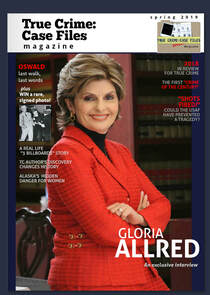 The True Crime Case Files Magazine editorial staff has given me permission to give my readers a sneak peek inside this thrilling issue.

This case includes an exclusive interview, Gloria Allred discusses celebrity justice, legal revisions for crime victims, and why she can’t slow down – unless behind the wheel. Allred is the founding partner of one of the leading women’s rights firms in the United States, and the most famous woman attorney practicing law in the nation today 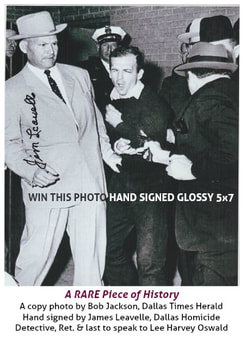 Win a glossy black & white copy of the iconic photograph of the assassination of Lee Harvey Oswald. This is a Pulitzer Prize winning photo by Bob Jackson taken Nov. 24, 1963.  This photo is hand-signed by Dallas, Texas Detective (Ret.) James Leavelle (“the man in the tan suit”) who was escorting Oswald that day. See the Spring 2019 issue for details – CLICK HERE

On November 22, 1963, Law enforcement officials in Dallas, Texas were escorting President John F. Kennedy’s suspected assassin Lee Harvey Oswald from the Dallas County Jail when Jack Ruby shot Oswald. Detective Jim Leavelle was handcuffed to Oswald and the last to speak to him. R. H. Jackson photographed Oswald’s being shot; he won the 1964 Pulitzer Prize. Win a copy of the famous photo signed by Detective Leavelle.