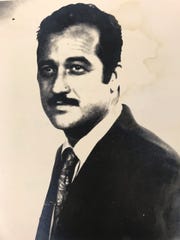 A trucker was found dead in the cab of his tractor-trailer. Bullet holes riddled the man’s torso and the cab of his truck. John Constant was shot 17 times by a high powered rifle, but there wasn’t any blood in the cab leading investigators to wonder if the hit was staged. Forty-six years later a dying witness blows this frozen case wide open. Will the killer finally face justice?

John Raymond Constant, Jr. was found murdered in the cab of his truck on March 16, 1973. The tractor-trailer truck was parked near the Little Tennessee River just off Hwy 411. The driver had suffered seventeen gunshot wounds, but police quickly began to suspect the crime scene was staged. Although the cab was riddled with bullets and Mr. Constant was shot multiple times, there was no blood found at the scene.

A witness lived in the area recalled hearing a car with a loud exhaust come by followed by what sounded like gunfire. A few moments later, heard the vehicle pass again. Was this man ambushed while he rested in his cab, or was the scene staged? Was the car with the loud exhaust filled with the killers, or was it the escape route after staging the scene?

The tractor-trailer truck’s emergency flashers were left blinking. Obviously, whoever did this wasn’t too worried about being caught, or they would have hidden the truck and shut off the lights.

Why would anyone want to murder this man? It seems Constant was starting to keep records of the shipments he was hauling. These shipments included bootleg cigarettes and black market items shipped by the local chapter of the Dixie Mafia. Family members claim John had been threatened and had decided to go to the FBI with his records.

Within a few months, outside investigators were brought in to form a task force since there were rumors of involvement by prominent citizens in the local community. Investigators wondered if this case could be tied to the Ray Owenby murder in June 1973. The two men were good friends, and both were murdered three months apart.

Ray Owenby was shot while clearing land for development in Spring City, TN. He was shot four times but still managed to drive the bulldozer a mile down the road to find help. He collapsed upon arrival. No suspects emerged in the case, but the similarities made police wonder if there was a connection.

Investigators believe John Constant was killed the day before his body was found and was transported to the location. Witnesses would emerge early in the investigation that seemed to corroborate this theory. Constant was seen at a garage in Etowah owned by H.B. Calhoun. Another man claimed to have seen John Constant and two men at a car wash in Etowah on March 15. While the witness washed his car, he heard something like firecrackers, and then a truck drove away with someone slumped in the seat. The witness was put under hypnosis, and a few new details emerged. The driver was Marvin Ray “Big John” Pittman, and the other man was supposedly Harold Buckner.

Big John Pittman was a drifter and worked as a hitman for the Dixie Mafia. He would eventually be murdered in his home in Tampa, Florida. His body was found on June 5, 1975. He had been shot once in the temple and left for dead.

Harold Buckner’s story doesn’t have such a quick ending. Buckner would be arrested in September 1982 after a witness came forward on their deathbed. Buckner had just run for Sheriff and lost and claimed it was a politically motivated arrest. It would take a year, but the charges were eventually dropped due to lack of evidence. To this day, Buckner claims he was framed, and the investigation was nothing more than a “witch hunt.”

After the deathbed witness statement and the subsequent events, the case sat dormant for decades. Richar Fisher, former D.A. told reporters that he always believed several people had a hand in the murder plot against John Constant. If something didn’t come up soon, everyone would be dead.

Although the case went cold, the victim’s family believed they knew the murderer from the beginning and fingered Max Calhoun (son of H.B. Calhoun). John’s two brothers threatened the Calhoun family within weeks of the murder, and eventually, a protection order was placed on them.

“I am confident in my mind that you set my brother up to be murdered.” – Harold Constant to Max Calhoun.

Forty-six years later, a witness comes forward, and her story could finally solve this case, but is it too late for justice?

Arwana Lee Amos,65 came forward in December 2018 with a statement. Amos is terminally ill and wanted to tell police what she knew about the historic case before she passed away. Law enforcement has not released the details of her statement, but soon afterward they arrested the 67-year-old Max Calhoun.

After half a century is justice possible in this case? The alleged shooter was killed decades ago, and the only man left standing is Calhoun. Is he the one? Time will tell, but who knows how long this chain of murder extends?

Self Defense Tips and Tricks: Practical Self Defense Solutions for the Street, Home, Workplace and Travel

One thought on “Dixie Mafia’s Chain of Murder”