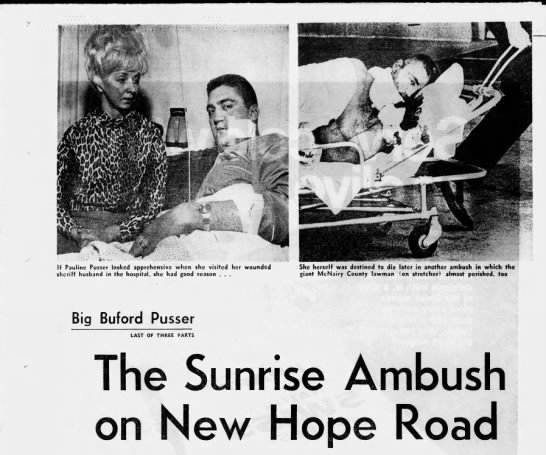 The sheriff was a controversial character from the moment he pinned the badge to his shirt. Some people loved him and thought he was a hero and others demonized him. Whatever your view of the legendary man, the following story is fact.

1967:
The Dixie Mafia was known as the State Line Mob and was led by Carl Douglas “Towhead” White. White was in prison when his lover, Louise Hathcock pulled a gun on Sheriff Pusser and was killed. A grand jury would find the sheriff had acted in self defense and no charges were filed. Upon hearing the news, White called his friend Kirksey Nix, Jr and ordered the hit on Sheriff Pusser and his wife, Pauline, or so we’re told. I will leave the speculation up to you.

Sherriff Pusser received a drunk & disorderly disturbance call at his home in the wee hours before dawn. Pauline Pusser decided to ride along with her husband as she had done on many occasions. This time that decision would be fatal. The pair drove out to New Hope Road to check it out. In reality, the disturbance was a ruse to ambush the young sheriff and his wife.
Pusser passed the New Hope Methodist church looking for the reported disturbance but continued driving when he found the place quiet. A dark colored Cadillac pulled out from behind the church and followed the sheriff with its lights off. As the two cars reached a narrow bridge, the Cadillac flashed on its headlights and came racing up beside the officer’s car. (Some accounts claim there were two cars following the sheriff.)
The Cadillac’s passenger opened fire hitting Pauline in the head. The sheriff ducked and stepped on the gas. The engine roared to life, and the car lurched ahead of the assassins. He sped up the road a couple of miles until he was sure he had lost his tail, and then pulled over to check on Pauline. Moments later the assassins again found their mark and gunshots rang out hitting Sherriff Pusser in the face and jaw blowing it apart. Somehow the sheriff would survive the attack, but Pauline was killed.
At first, Pusser declared he knew precisely who was responsible and named Towhead White, George McGann, Gary McDaniel, and Kirksey Nix. A few others were involved in the ambush but the proof wouldn’t come out for decades. After 18 days in the hospital and a dozen surgeries to repair his face, Pusser declared he couldn’t tell who had shot him. Perhaps he had a temporary bout of amnesia, or perhaps the sheriff was planning to go rogue. Pauline Pusser was laid to rest while the sheriff was in the hospital. Some of his critics claim that he refused to attend the funeral, but I haven’t seen any official documentation to prove it.

Some claim that Pusser had girlfriends on the side and Pauline was about to divorce him. Again, I have no official proof of that. The man’s main critic claims that he talked to a bunch of the locals who told him this story. So, it must be true, right? Wrong! What kind of…never mind. Of course if you talk to all the locals they are going to repeat the rumor mill. Many locals had family members that were bootleggers, so their view of the authorities was automatically negative. I reached out to the man, but he wouldn’t respond to my interview request.

Did Sheriff Pusser blow off his own face to avoid getting a divorce?

I would never claim the sheriff was a saint, but to claim that he staged the ambush so he could kill his wife is a bit ludicrous. If this was the case, he would have taken a high powered rifle, put it in his non-dominant hand, and shot himself in the face. I don’t know very many people willing to blow their own face off to avoid getting a divorce.

Although I am not about to dispute Sheriff Pusser’s marriage troubles, I am a little skeptical when it comes to a man blowing off half of his face. Here’s a theory that makes more sense. Whatever the state of his home life, Buford Pusser had just killed the girlfriend of a very prominent member of the Dixie Mafia. Towhead White was furious and ordered a hit. Now here’s another rumor that might ring true if you think about it.

Some people say that the target was actually Pauline. I cannot explain it in this post, but I will tell you about it in the next one.

Time would witness the deaths of three of the conspirators, but Kirksey Nix would remain on the loose. Allegedly, there were three others involved in the ambush and the purpose was to kill Buford Pusser’s wife. Those conspirators planned to send the sheriff off on a wild goose chase, then return to the house. The plan was to lure Pauline out with a innocent crippled boy. The other men would kill her in revenge of Louis Hathcock.

The best laid plans go awry and they see Pauline in the car with Buford as they pass by. This would lead to the ambush on New Hope Rd. The crippled boy was along for the ride of his life whether he wanted to go or not. This night would lead to much blood shed and the death of a boy. While the newspapers would go on to hail Sheriff Pusser as a hero and Hollywood would make movies about him, the death of the boy gets lost in the shuffle.

Next week we will dive into the aftermath of the ambush and lay out the cover ups that would condemn the death of Ronnie Anderson to the cold case file.

The following links are for the benefit of Synova’s readers and are not an all-inclusive source listing.

The State Line Mob: A True Story of Murder and Intrigue

If you enjoy this content don’t forget to sign up for Synova’s Weekly True Crime Newsletter. You will receive exclusive content directly in your inbox. As a gift for joining you will also receive the Grim Justice e-book free.