Kirksey Nix, Jr. survived the Revenge of Buford Pusser, but his freedom would be short-lived. Within a couple of years, a judge’s Cadillac explodes in front of the state capitol, a man dies on Easter morning defending his home against invaders, and one shot to the chest finally brings the Dixie Mafia Kingpin to his knees.

Kirksey McCord Nix, Jr. was the son of a prominent judge in Oklahoma, but that didn’t stop his life of crime. It probably encouraged it. Nix had been on law enforcement radar for a decade, but no charges would stick. After ambushing Sheriff Pusser on New Hope Road, everyone involved felt the wrath of the disfigured lawman. Somehow, Nix would escape, but his freedom wouldn’t last long.

The ambush and killing of Pauline Pusser wasn’t Kirksey’s first slaying. His group of rogues was accused of several home invasions and murders across four different states. It seemed as if nothing could stop this group of murderous thieves. A series of events would lead to Junior’s downfall, and it would start shortly after the death of Pauline Pusser.

The year before the ambush on Pusser, Junior was arrested on felony accounts of burglary and grand larceny. December 29, 1965, Nix and his little gang broke into a boy’s summer camp near Mount Ida, Arkansas. They stole ten rifles, a movie projector, and sporting equipment according to the the Daily Oklahoman’s article on January 22, 1966.

He was in trouble in April of 1966 for passing bad checks and then again in August for using illegal license plates. After paying fines, Nix kicks off a robbery spree that would span several states, and some of these cases would end up in murder. Somehow Junior’s name stays out of the newspapers until the ambush of Sheriff Pusser on August 12, 1967.

Buford Pusser named Kirksey Nix, Jr. and a few others as the shooters who ambushed him on that fateful day in August. After spending hours combing through newspaper archives, I found Junior didn’t make headlines again until 1968 that’s not to say he was laying low.

March 19, 1968, The Daily Oklahoman reported that Kirksey Nix, Jr. pled guilty to some minor charges including reckless driving and the unlawful use of a radio. It seemed Junior had been monitoring the police radio frequencies. Perhaps he was trying to watch out for Pusser. Who knows?

April 30, 1968, Junior is jailed after his gang unsuccessfully tried to rob the Metropolitan Life Insurance Company in Atlanta, GA. This time his crew consisted of four men and one unnamed woman. During the robbery attempt, the thieves were disturbed by a guard named Robert P. Fouche. He was wounded in the robbery, but after a brief hospital stay, he made a full recovery.

May 21, 1968, Junior’s father, Judge Kirksey Nix, drove a dark-colored 1967 Cadillac to work and parked in front of the State Capitol. An hour after arriving, the car explodes throwing metal shards all over the area. Luckily no one was hurt in the explosion. Authorities quickly conclude the blast was not caused by a bomb, so what made it erupt into a ball of flames? Supposedly there were a couple of oxygen tanks in the trunk of the car that caused the explosion, but no one knows for sure.

The car had been included in a robbery investigation only four months before it’s explosion. Then it was supposedly owned by Junior. The Lawton Constitution reported on May 24, 1968, that the car had Mississippi license plates and it was registered to Doris D’ Angelo.

This is where the theories start to creep in…

If we take the “other” story of the ambush as fact, then we may know precisely where that dark-colored Cadillac came from and what it was used for.

Lt. Dan Anderson had a dark-colored Cadillac that suddenly disappeared after the death of his son. His family wondered why he got rid of it, and no one really got an explanation.

Was this the car used in the ambush on Buford Pusser? 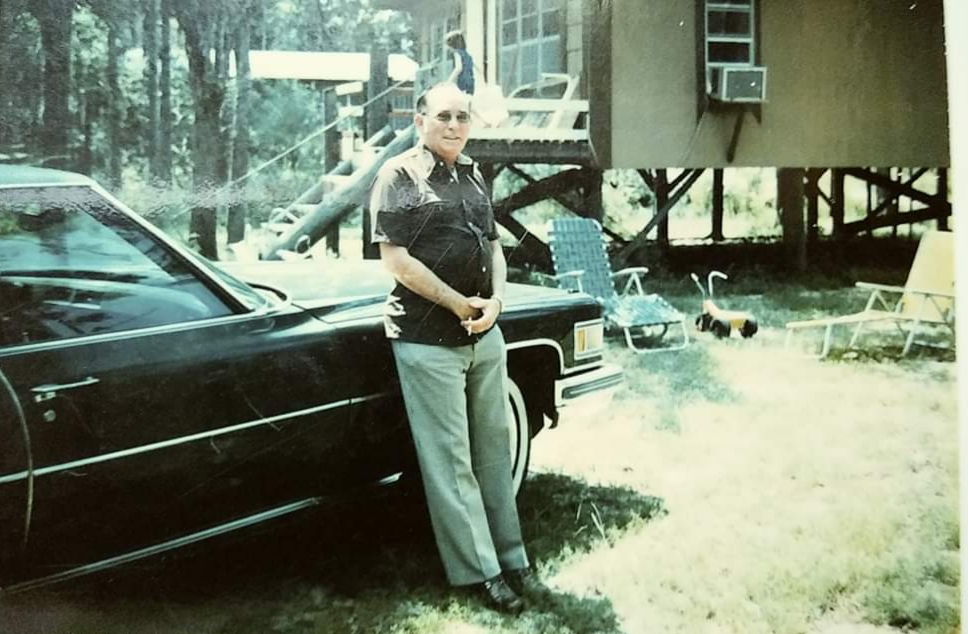 Who is Doris D’ Angelo?

Doris was married to a local club owner named Dewey D’Angelo. This big-time Dixie Mafia member sheltered Junior and ran his prostitution house in Mississippi. Dan Anderson and a man named Hobbs frequented this local hang out often. Without warning, Dan and Hobbs show up in the back room of the club, and a deal is made for the Cadillac. (There’s never any paperwork on this transaction. This information was passed down by the rumor mill.) A short time later it is blown up in front of the Oklahoma State Capital. Why would it be blown up unless it held vital evidence? A simple defunct robbery wouldn’t warrant such drastic action. I contend that it was the car that Ronnie Anderson borrowed from his dad so he could go out with the guys.

Now that the car is gone, what’s next for Junior? Well, more robberies and murder, of course. During the 1969 Mardi Gras celebrations a group of heavily armed men raids a camp of carnival workers near Lake Pontchartrain. 44-year-old carnival worker Margie George was shot and killed during the raid.

Easter morning in 1971, Nix and his gang break into the home of a wealthy grocer named Frank Corso. Corso is awakened by his wife and grabs a gun. He fires upon the thieves, and they retreat, but not before shooting the homeowner. He dies in his wife’s arms, but his bullet had found its mark. Kirksey Nix, Jr. was hit square in the chest, and the bullet lodged in his abdomen. The next day Junior shos up at St. Paul’s hospital in Dallas where he received treatment before being arrested by Dallas authorities. In 1972, Nix and his cohorts would be convicted of the murder of Corso and received life in prison. The king of the Dixie Mafia had fallen, but it wouldn’t be the last time his name made headlines. Come back next week, and you’ll hear how the king’s reign faired behind bars.

Sources for this article have been linked directly into the text of the article.

3 thoughts on “The Downfall of A Dixie Mafia Kingpin – Kirksey Nix, Jr. Arrested”