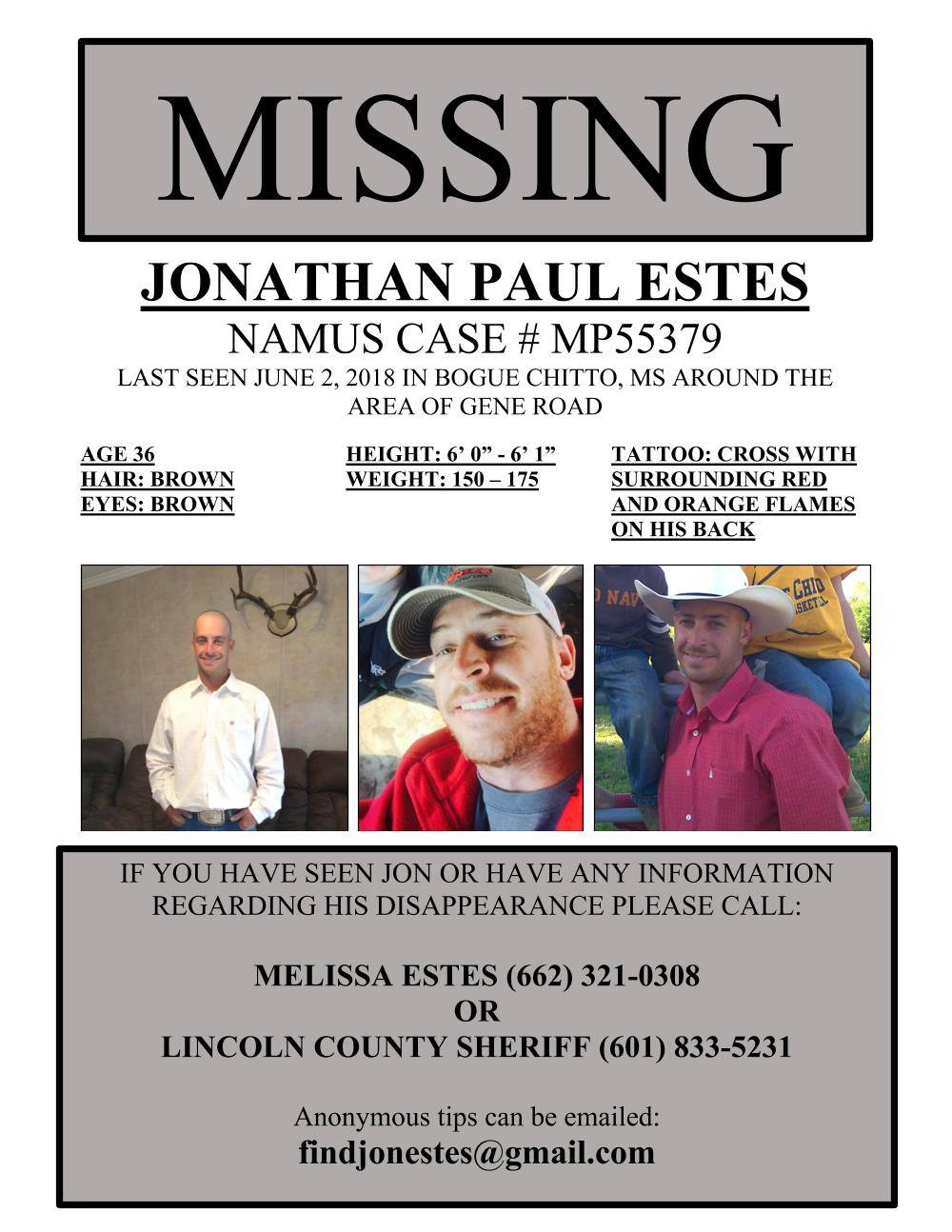 It’s the dreaded Triple D Threat; Domestic Dispute, Divorce, and Disappearance. After a rocky end to their 13-year marriage, the separation was inevitable, but when allegations arise of domestic abuse and the husband vanishes, this case takes a turn for the worse. What happened to Jonathan Estes?

Jonathan Paul Estes, 36 was last seen on June 2, 2018, in Bogue Chitto, Mississippi around his home. Estes was a construction worker and spent a great deal of time working out of town. He worked hard and enjoyed time with his children when he was home. It seemed as if the little family had life by the tail, but things aren’t always what they seem. The last year of his marriage to Cindy had been tumultuous, but Jon always tried to find ways to appease his wife.

Several months before filing for divorce, Jon began to suspect his wife was cheating on him while he was out of town working. He even placed a few deer cameras around his home to see who was pulling into his driveway while he was gone. Things finally deteriorated to the point that Jon hired a private investigator. These problems reached a boiling point when his 13-yr-old son found some lewd pictures on his mother’s phone and forwarded them to his father.

Jon filed for divorce and moved five miles away from the family home, but remained close enough to spend time with his kids. This should be the end of the chaos, but unfortunately, it was just the beginning.

When Jon took the divorce papers to the house for Cindy to sign a fight broke out, and life would never be the same for the Estes family. Cindy claimed that Jon raped her at gunpoint. Jon says that she became angry when he brought the papers and began attacking him. He turns to leave and while in her driveway, she runs him over with her car. While Jon is trying to recover Cindy raced down the street and straight to the police station. (It is assumed that she went straight there, but who knows she may have stopped for a coke.) Once there, she filed charges against Jon for the alleged rape.

Jon, driving his truck, was headed back to his house when he noticed the ‘GPS’ location device had suddenly been activated. Knowing his wife’s vindictive personality, he figured he would just dump the truck. Jon turned around and drove the truck (which was inconsequentially registered in Cindy’s name) across the hayfield behind the family home. The surrounding property was the cattle farm owned by Cindy’s family. There amongst the hay and treeline, Jon left his truck behind. He called a neighbor to pick him up and met her at the highway.

Jon returns to his home where his nosey neighbor keeps watch on the house. He told her that he was going to have a friend pick him up and take him to the police station so he could sort out this mess, but no one ever came to pick him up, and no one ever saw the man again.

The last known contact was when Jon called his friend the next morning to talk about the craziness of his divorce. During his conversation, he mentioned that a cop car kept driving back and forth in front of his house. He told his friend that he was going to walk out to the end of his driveway and talk to them. Maybe he could figure out what in the world was going on. Unfortunately, no one ever heard from him again. He never called his friend back, and the patrolling officers say he never walked out and talked to them. Where did he go? Did he run off like the police initially believed?

The family of Jon Estes doesn’t think he would have run away from his problems. He wasn’t the type, but it was a logical explanation at first anyway. Now, a year later, that option isn’t really on the table anymore.

Apparently, Jon Estes was a gentle person that would do almost anything to appease his wife, and I say this because of what came out later in the investigation. Jon and Cindy had been having trouble for quite a while. When Jon’s sister hacked into his email account, trying to find clues to his whereabouts, she found out how desperate he was to save his marriage. The last couple of years, he had agreed to a more open-type of marriage that involved couples and partner swapping. This was disturbing enough, but then she found the pictures and videos taken of Cindy while Jon was away. This wasn’t part of the deal.

The sister also found out about Jon’s own little investigation into his wife’s infidelity. He had been collecting information on her extramarital affairs in case he needed evidence during the divorce proceedings. Although no names have been released publicly, it seems evident that one of his wife’s lovers held some type of position of authority in the small community. Perhaps this is why Jon disappeared. Either way, Cindy never once tried to find her husband. She claims he ran off so he wouldn’t have to pay child support, but the family has the receipts to show Jon was paying child support to her months before his disappearance and before the divorce was even filed. He wanted his kids taken care of no matter what happened to his marriage.

If Jon had run away to avoid his problems, wouldn’t it make sense for her to try to find him to get justice for what he had supposedly done to her? Wouldn’t she hunt him down so he would be required to support his children? Obviously, Cindy doesn’t think so because other than bashing him online; she hasn’t publicly put forth any effort to find him.

Four months after the disappearance of Jonathan Estes, a grand jury convened to hear the case against him regarding the rape allegations. They find there’s no evidence to this story and drop the charges entirely. The family was informed that no charges would be brought against him if he happened to return because there simply wasn’t any evidence that an attack ever occurred. A short time later, Cindy filed for divorce citing abandonment by Jon and was granted full custody of their two kids.

As if this case wasn’t bizarre enough, there’s another twist to this saga. Cindy is coming up for trial for stealing a bobcat. For those of you who don’t know, a Bobcat is a small bulldozer used in construction. During the chaos of the missing person’s case, and before the couple could legally divide their belongings, Cindy was busily posting everything on Facebook for sale. During this time she sold a bobcat that was at the family home that didn’t belong to either Cindy or Jon. It actually belonged to his dad and was only borrowed.

Jon’s father drove the five hours to find his son and to file charges at the police station about his bulldozer. During the chaos, this wasn’t taken care of properly, and by the time the reports were filed, the bobcat had already been sold for a meager amount. Strangely, in this tiny town where everyone knows and is related to everyone else nobody knows what happened to this bobcat.

How does this missing piece of construction equipment play into this case? I really don’t know. I just hope it hadn’t been used in the process of covering up a murder. If you have any information on this case, please contact the Lincoln County Sheriff’s Department 601-833-5231

This list of links is not an all encompassing source citing. All of the information used in this article can be easily found online. Links below were used as sources and are recommended reading for Synova’s readers.

2 thoughts on “The Jonathan Estes Disappearance”