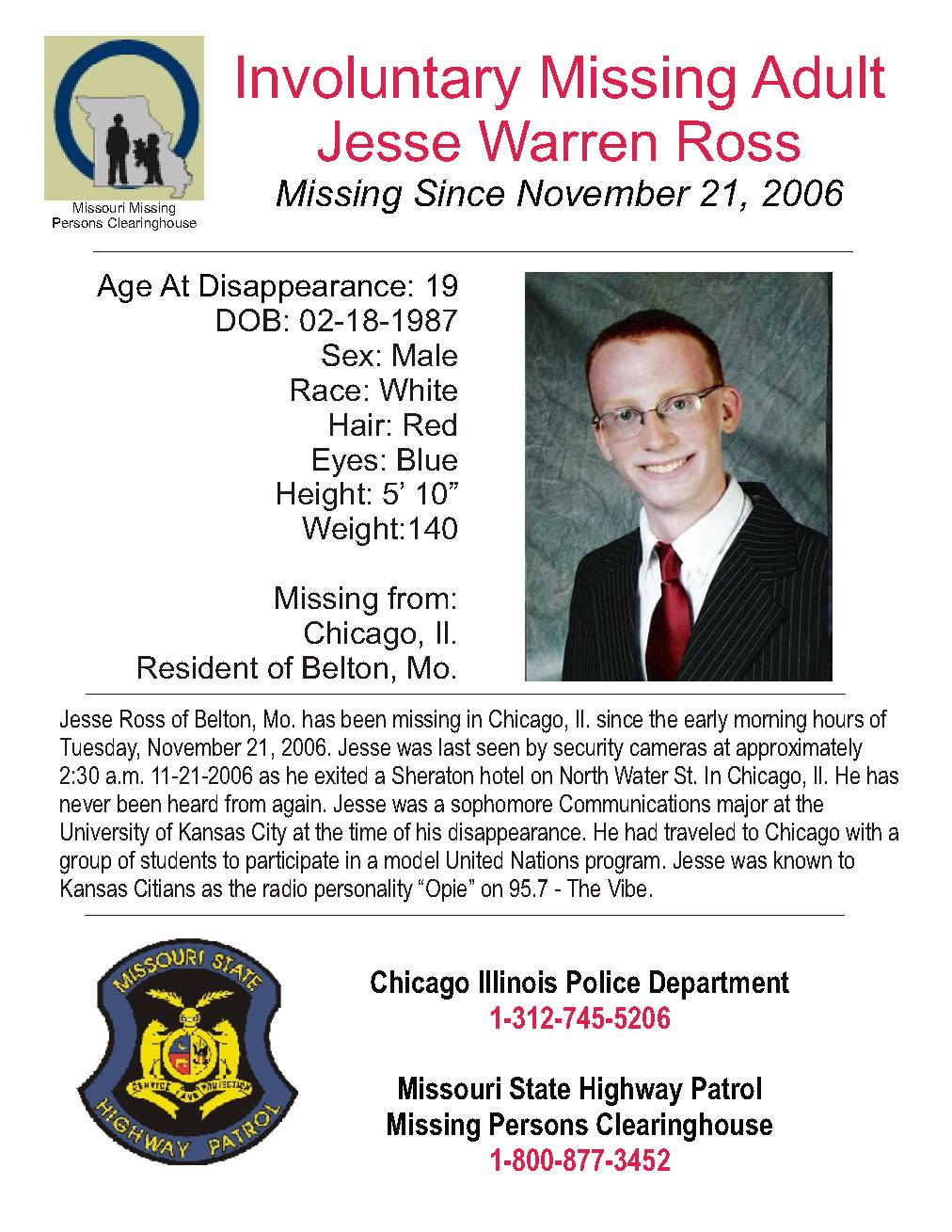 A local K.C. radio personality leaves for a college field trip in Chicago and never returns. “Opie Cunningham” from 95.7 The Vibe was going to a conference with thirty other students from the University of Kansas City. The group was scheduled to return home two days before Thanksgiving, 2006 but Opie wasn’t among them. Where’s Opie?

Jesse Ross, 19 was a sophomore at UKC and worked as a radio personality on a local station. With his flaming red hair, freckles, and slightly mischievous personality, Opie (as in Ron Howard’s character on the Andy Griffeth Show) was an obvious nickname. Jesse carried this moniker into his radio career and became part of a segment called “Where’s Opie?” For these shows, Jesse would broadcast from random points throughout the city, and the listeners would then be required to call in and guess his location. This quick-witted young man thrived on the radio waves, and just before his trip to Chicago, Jesse Ross had been promoted from intern to paid employee with the station.

In November 2006 Jesse was scheduled to attend a four-day conference with thirty other students and his professor. The meeting was set up like a mock United Nations conference, and over 1,200 students from across the nation would gather at the Sheraton Hotel in Chicago for the event. Donald Ross, Jesse’s father, dropped his son off at the school in the wee hours of the morning and told his son goodbye. He never realized it would be the last time.

November 20, 2006, was the last full day of events, and everyone was attending little parties and meetings as the event wound down to a close. Jesse calls his mother and says he’s having a great time. He promises to call the next day when the group loads up in the van and starts their long drive home. A party was held that final night, but reports differ on the details. Some say the party lasted from 10 pm to 3 am, while others say it was held from midnight to 3 am. Whatever the case, there was alcohol involved, and in the middle of the party, a mock “Emergency Security Meeting” was called. All of this seems strange, but supposedly it had a purpose. Around thirty students attended this meeting, and the group took a break around 2:30 am.

Why was a bunch of kids called to a meeting at 2:30 in the morning to pretend to negotiate affairs of state? Seems strange.

The events were held in one building, and most of the group were staying at the 4 Points Sheratan Hotel half a mile away. The walkway between the venues was well-lit, heavily trafficked, and entirely covered by security cameras. What could go wrong? Hum. Let’s see about that. We have a group of underage kids drunk walking after dark in one of the most dangerous cities in America. Oh, I have a great idea! Let’s call them to a meeting at 2:30 am.

During the break, Jesse is seen leaving the conference room by the security cameras in the hotel, but no one can say what happened next. Did he go to the room of another college student to party? Did he have an accident inside the hotel and it was covered up? No one can prove that Jesse left the building, and no security footage picked him up, walking back to his hotel room. What happened to this teenager? Almost thirteen years have passed, and no one can find him. Did he meet a predator on his way back? Did he stumble his way down to the bridge and fall in?

A new documentary titled, “When I last Saw Jesse,” was released this past April at the K.C. Film Festival. Local filmmaker, Brian Rose spent six years trying to interview those college kids at the conference and claims to have a new witness.  He doesn’t disclose what type of information this witness gave, so we can only hope it will help solve this strange case. If you have any information on this case, please contact the Chicago P.D. at (312) 744-8266.

THIS LIST OF LINKS IS NOT AN ALL ENCOMPASSING SOURCE CITING. ALL OF THE INFORMATION USED IN THIS ARTICLE CAN BE EASILY FOUND ONLINE. LINKS BELOW WERE USED AS SOURCES AND ARE RECOMMENDED READING FOR SYNOVA’S READERS.

I’ll Be Gone in the Dark: One Woman’s Obsessive Search for the Golden State Killer