Photo courtesy of the Murdered In Mississippi Facebook Page

A very tidy 80-yr-old trudges out through his grassy lawn in his sock feet with his pants undone, shoots himself in the head, falls backward leaving an abrasion on the back of his head, and then flops over cutting his shin and bruising the top of his toes. If that wasn’t enough to question the suicide ruling then hold on, there’s more. Why did he have gun powder residue on BOTH hands when the hairpin trigger on his service revolver was easily manageable? Why did the blood splatter on his pants look as if he were kneeling? Why were the bullet casings destroyed a few days later WITHOUT the consent of family? Why was the daughter’s name forged on the consent form?

April 18, 2003:
Around 4:30 pm, Lt. Dan Anderson supposedly walked out to his driveway and shot himself in the head with his service revolver. Anderson lived on a busy street, yet there weren’t any witnesses during rush hour traffic. Years later the police somehow drag up two people who say they heard a gunshot sometime in the afternoon, but no one can find these witnesses to re-question them. It seemed they appeared just in time for the FOIA request but disappeared again afterward. Who knows? All of that is merely speculation. I will let you speculate on your own time. Here are the facts of this case as I can prove from interviewing the victim’s family and working through the official autopsy.
Ms. Learn told the police that Dan had sent her to the store to buy cigarettes, and when she returned, she found him in the driveway. The FOIA documents clearly state what she told the police. Learn told the investigator that she parked right behind Dan Anderson’s Cadillac and she confirmed that this car was still there when she moved out of the house later that day after the death of Anderson. I will tell you why that is significant later.
Around midnight Phyllis received a phone call from her father’s attorney stating that Dan Anderson had committed suicide. She fell to the floor, devastated and screamed, “not again.” She packed up and went to Gulfport. When she got there the coroner, Gary Hargrove wouldn’t allow her to see her father’s body. Instead of showing some compassion for the grieving family, he chose to be rude and arrogant. Since she wasn’t getting anywhere with the coroner, Phyllis drove over to her father’s house. She expected to see some evidence of a crime. Instead, the house looked like nothing had happened. There wasn’t any crime scene tape, the driveway was clean, and there weren’t any bloodstains. She walked into the house looking for evidence of violence but found none. It was as if time had stopped, and this was a bad dream.
Dan liked to keep everything neat and tidy, but the house looked as if it had been detailed. There wasn’t a speck of dust in the place. To make matters worse, Learn had lived there for a month, and there wasn’t any evidence of her left. Phyllis said she couldn’t even find a bobby pin. In the FOIA papers MS. Learn said she only lived there four days, but Phyllis had received a phone call about her two weeks before her father’s death, so we know that’s a lie.
As Phyllis slowly took in her surroundings, she noticed something odd. On the nightstand by her father’s bed was a carton of cigarettes with four packs in it. She walked into the den where her father spent a lot of time, and there were two more packs on the end table. One pack was full, and the other was only missing four cigarettes. Why had Learn gone out for cigarettes when there were so many packs laying around the house?
She also noticed that her father’s valuables had been taken. He was a 33rd degree Mason and had beautiful rings, but they were nowhere to be found. All the china and crystal in the house had been thinned out and the remaining pieces spaced out on the shelves so their removal wouldn’t be apparent. The more she looked, the more she noticed things missing. Also, the Cadillac wasn’t in the driveway anymore. Police would later claim that it had been sold months before her father’s death but remember the FOIA papers said that it was IN THE DRIVEWAY on the day of Anderson’s death.
Now let’s move on to the autopsy report. If you aren’t already questioning this case and its suicide ruling the first few lines of the autopsy report will force you to question it.
The autopsy diagnoses dated 4-19-2003 states the following:

Ok. It also states that his pants were unbuttoned and the zipper down. His socks were covered in dry plant material. It also indicates that his fingernails and toenails were neatly clipped and clean.
Ok. Here goes the rant…
Dan Anderson was a tidy person, and I’ve been told that wouldn’t go outside in his sock feet. If he wanted to, there was a driveway and a sidewalk to walk on. He was particular enough to have nice nails, but he ran outside with his pants undone?
The documents say one hammerless Smith & Wesson 38 service revolver, four bullets, one shell casing, and one leather holster was recovered from the scene. No one recovered the spent bullet. The autopsy said it was a through and through wound, so why wasn’t it recovered in the grass? No ballistics testing was done to prove that this gun was the weapon used to kill Anderson. To make it even worse, the FOIA request shows the police department destroyed the bullets and shell casing four days after Anderson’s death. They sent Phyllis a copy of this release that she supposedly had signed. Phyllis swears she has never seen the paper before and the signature on the bottom of it was not hers.
Who signed Phyllis’ name?
Dan Anderson was 80, but he was a strong man and didn’t suffer from Parkinson’s disease. Why then would he have to use both hands to fire his service revolver? Remember the autopsy said there was gunshot residue and blood spatter on BOTH hands. Anderson showed no signs of suicidal tendencies.
Now here comes the outline of the wounds found on Dan Anderson’s body, excluding the gunshot wound. To reconstruct these wounds, I got help from my son. I drew all the markings on his hands and legs with a washable marker and photographed them. This is what I found.
Left index fingertip anteriorly (meaning the palm side) there was a fresh wound. The left middle finger dorsally (meaning the backside of the hand) over the proximal Phalanx was another wound. Proximal Phalanx means the backside of the hand down between the base of the finger and the first knuckle.
The autopsy also states he had a large wound on the FRONT of his RIGHT shin and on the top of the right big toe. Lastly, it says he had an abrasion on the back of the left-hand side of his head just above the hairline. Dan Anderson had male pattern baldness.
If Lt. Anderson somehow shot himself with both hands and fell BACKWARD, that would account for the wound on the back of his head. If this is the case, then why the scrape down his right shin and his right toe? If he fell FORWARD, he might receive a small abrasion on his knee, but not a large scrape, and he wouldn’t have a wound on the back of his head.
My armchair conclusion is Lt. Anderson’s death should not be ruled suicide. It is highly unlikely that this man would suddenly decide to send off his housekeeper, undo his pants, walk out in his front yard and shoot himself using both hands on his snub-nosed revolver. He wasn’t drunk. He wasn’t suicidal, and he cared about neatness enough to keep both his fingernails and toenails groomed.
The officials would like to make you believe this is what happened, and to add to the fairytale, he must have shot, then fell forward, dragged himself around the yard scrapping his leg up, then dropped down upon his back hitting the back of his head. If all of that makes sense to you, then I must add all the details of the missing items and the missing Cadillac. If you believe all of that, then I have some oceanfront property in Kansas that I would like to sell to you.
After writing about this case a year ago, Phyllis has been blessed to find a forensic investigator willing to take on her case. This investigator has found many new details about this case, and witnesses have come forward to clear up some missing links. Now, there is some indication that the original autopsy might have been manipulated to bolster the suicide claims. Unfortunately, those details must be held close until after the trial, but you can bet your bottom dollar I will be writing more about it when I get the green light.

THIS LIST OF LINKS IS NOT AN ALL-ENCOMPASSING SOURCE CITING. ALL OF THE INFORMATION USED IN THIS ARTICLE CAN BE EASILY FOUND ONLINE. LINKS BELOW WERE USED AS SOURCES AND ARE RECOMMENDED READING FOR SYNOVA’S READERS. Synova strives to cite all the sources used during her case study, but occasionally a source may be missed by mistake. It is not intentional, and no copyright infringement is intended.

More Information On This Case:

If you enjoy this content, don’t forget to sign up for Synova’s Weekly True Crime Newsletter. You will receive exclusive content directly in your inbox. As a gift for joining you will also receive the Grim Justice ebook free.

All information used to create this content is a matter of public record and can be easily found online or can be verified by the guest blogger. Any participation or alleged involvement of any party mentioned within this site is purely speculation. As the law states, an individual is innocent until PROVEN guilty. I do not own the photos used in this post. All photos are used under the fair use act. No copyright infringement intended.©2017-2019. All rights reserved. 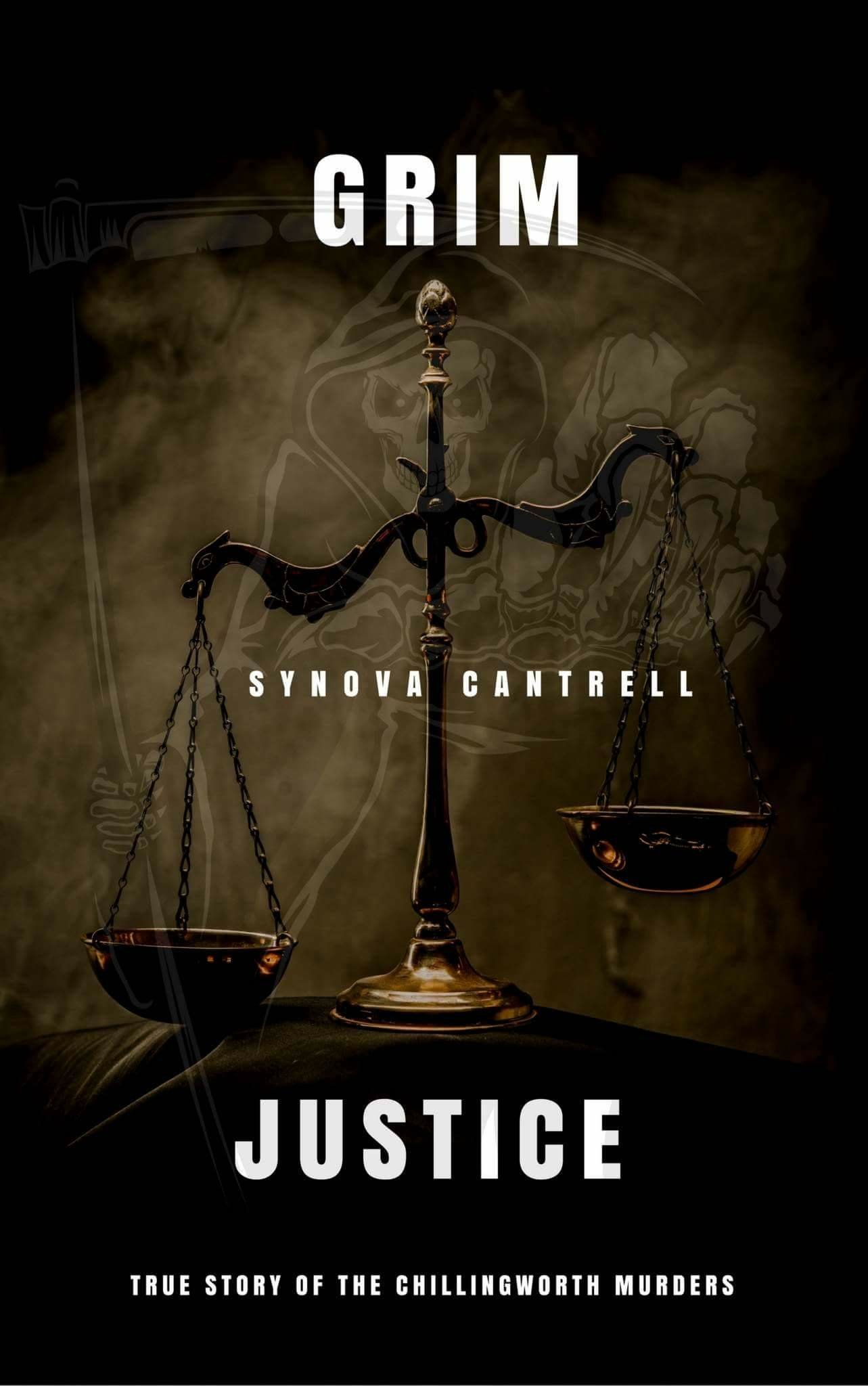