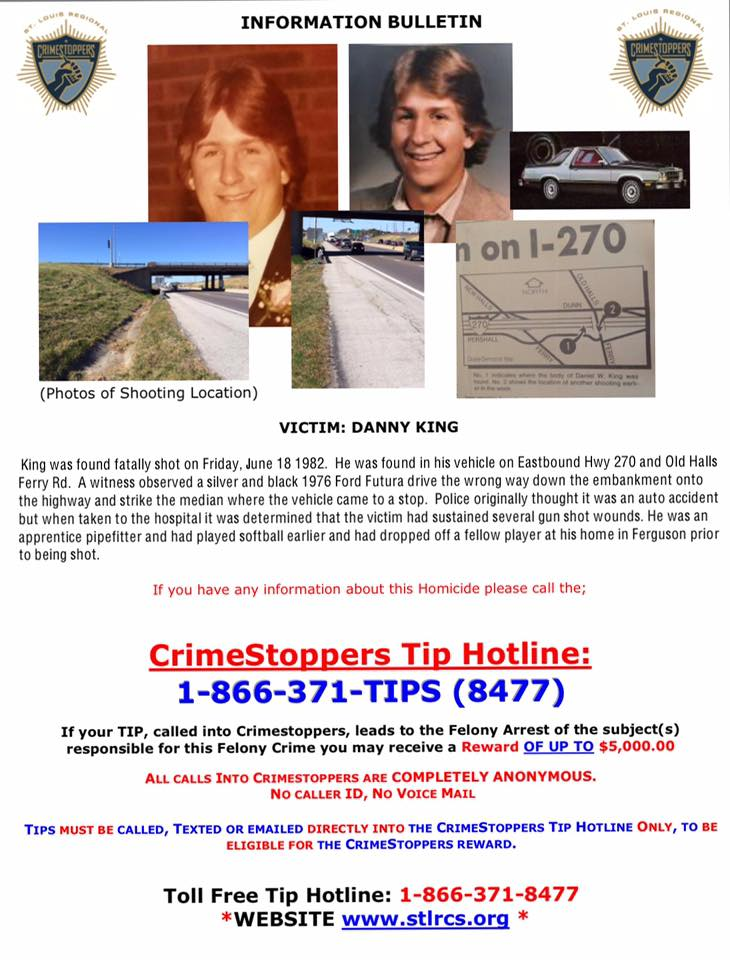 He was a 20-yr-old newlywed with a three-day-old baby. Daniel W. King was also the son-in-law of a prominent local judge in St. Louis County, MO. He was working as an apprentice pipe fitter at Honeywell, Inc., and life seemed to be starting off on the right foot, unfortunately, this would come to a screeching halt on June 18, 1982.

Danny went to the local hospital to have dinner with his wife and new baby before heading out to his weekly softball game with the Pipe fitters Local 562. At the game, the ecstatic new father handed out pink cigars to all his teammates. After the game, a few of the guys went to a local bar to celebrate. Danny drove two of his teammates home around 2 am and was heading to his home in Florissant, MO.

For some unknown reason, Danny pulled his 1976 Ford Futura to the side of the road. It is unclear if a vehicle was already parked there, or if one pulled over in front of him. Whatever the case, a shooter exited the other car and begins shooting Danny King through the passenger side window. Tire tracks show that the wounded man threw his car into reverse and tore up the road backward. The car careened up the grassy embankment before crashing back down across the road only coming to a stop when the car hits the concrete median.

The autopsy showed three of the five shots hit King in the side and arm. No one knows who would have wanted the young man dead. He had no known enemies. Police quickly ruled out robbery since his wallet was undisturbed. While everyone was asking questions, it seemed the investigators didn’t ask enough. Danny’s brother, Jim has gone back and talked to all his brother’s close friends and even his wife. None of them had been interviewed by police. Why? What happened?

When the news was reported, ten different witnesses called into the police to report what they had seen. Every one of them said there were two men standing outside of Danny’s car that night. Who were these men? Why did he pull over in the first place? There wasn’t anything wrong with his car. Why weren’t these leads followed up? All these questions would haunt the King family.

This case sat dormant for over thirty years until Jim King finally caught the attention of the local authorities. St. Louis County Police officially reopened the case in November of 2016. Maybe now the family will find answers.