This week we have a guest post by blogger Giselle M. For those of you who don’t know, Synova suffered a serious injury and landed in the hospital. She appreciates all the support she has received during her recovery. Thank you, Giselle, for providing this story. 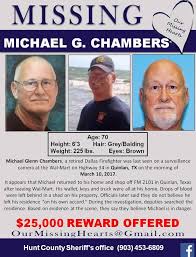 Retired Firefighter vanishes. Locals wonder if his wife’s affairs could have pushed him over the edge. Blood in the workshop proves otherwise. Where is Michael Chambers?

Michael Chambers, 70, disappeared in 2017 from his Hunt County home in Quinlan, about 40 miles east of Dallas. Deputies said they believe he may have been taken against his will after they found blood in his shop outside his home. A short time later they say he may have committed suicide.

Deputies say whatever happened to him most likely occurred between noon and 3 p.m. that Friday. His truck was at the house along with his keys and wallet. But police say Chambers and his cell phone and drivers’ license disappeared.

Chambers was last seen March 10 entering and then leaving the Quinlan Walmart alone. Surveillance video shows Chambers entering the store, paying for a couple of items, walking out to his truck and driving away.
Hunt County Sheriff Randy Meeks says Chambers and his family have been close friends for many years. He stated it his opinion Meeks committed suicide. The evidence shows a different story.

“I was his Sunday school teacher for several years,” the sheriff said. “I’ve never known a more devout Christian man than Michael Chambers. I trust him with my life.”

“This is absolutely unlike him. He’s not a person that just disappears,” said Cherri Hanes, Chambers’ daughter. “Someone knows something, and we plead and entreat you if that person is here, call the Hunt County Sheriff’s Department.”

The suicide theory states that this man with bad knees rode his bike twenty miles to a bridge on 9’ above the water and jumped off. No one has found the bike. No one can prove he had another bike besides the old one that still hangs in the garage.

Chambers is 6 feet 3 inches tall with balding gray hair. He has surgical scars on his right knee and both shoulders. He often wears a Dallas Fire & Rescue t-shirt. There is a $25,000 reward for specific information leading to his whereabouts.

The family has suspicions regarding his disappearance. A petition was started asking the Texas Rangers Company B to take over the investigation into the disappearance of Michael Chambers.

– Mr. Chambers was last seen at Walmart in Quinlan at approximately 11:00 am.
– Neighbors came home around 3 PM and spent the entire afternoon working outside in the yard. (Noticed nothing unusual at the Chambers’ house)
– Later that evening Mrs. Chambers returns home to find her husband missing

Strangely, Mrs. Chambers left work around 2 PM, and her phone went off for over an hour after speaking to her boyfriend.
Some wonder if her husband found out about her affair and committed suicide. This is not the case. His wife’s infidelity was known to him for a long time.

Mrs. Chambers alleges to have arrived home from work and found her husband gone. His truck was parked at their house. The workshop on the property was found locked with Mr. Chambers’ keys, and wallet inside. Missing were his cell phone, and his Texas driver’s license. It is unconfirmed whether a small amount of cash was missing from his wallet. A large amount of money was still in the workshop, so robbery couldn’t be the motive.

Mrs. Chambers claims to have observed several “quarter” sized blood droplets on the floor of the workshop where he housed his classic cars. She stated to a family friend that she “thought it was transmission fluid.” (Samples of the blood were collected, and DNA analysis later confirmed that the blood belonged to Mr. Chambers. The Private Investigator claims there was a large amount of blood)

Mrs. Chambers then contacted a family friend, Penny Edwards, and asked her to come over to the residence because Mr. Chambers was missing. Mrs. Chambers called the Hunt County Sheriff’s Office at approximately 7:45 pm. Before police arrived, Mrs. Chambers told Ms. Edwards that she needs her to “be on my side.”

Hunt County Sheriff’s Office initially dispatched a single deputy. Two others joined him after it was apparent that Mr. Chambers was in fact missing. The deputies and neighbors searched the 10 acres of the Chambers property but did not find any trace of Mr. Chambers.

Mr. Chambers’ phone was last pinged near Lake Tawokoni shortly after he disappeared.

On Wednesday, March 15, 2017, the Hunt County Sheriff’s Office searched a five-acre area near the Chambers’ property. They had the help of more than 75 volunteers. Despite the search, investigators found zero evidence.

On or around March 20, 2017, Rebecca Chambers canceled/suspended the cell phone service for two of the lines on the Chambers’ family account with Verizon. She dropped the phone numbers and turned off the service that belonged to her husband’s phone, and her son’s phone, leaving only her phone service active.

Mrs. Chambers sold Mr. Chambers’ pickup truck soon after his disappearance. It is unknown if Mr. Chambers’ vehicle financing included a credit life option which would have paid off the truck in the event of his death. On June 28, 2017, the Texas Department of Transportation issued a new title on the 2014 Dodge Ram truck that had belonged to Mr. Chambers. Rather than the new owner’s name, the title listed “Michael Chambers Rebecca Lynn Chambers” as the vehicle owner. There was no lien holder listed on the new title.

According to the Will filed, Mrs. Chambers is the sole heir to Mr. Chambers’ property at this time. Per the proceedings, Mrs. Chambers is required to deposit 50% of any proceeds she receives as a result of all community property assets sold into an escrow account to be left untouched for at least three years. Any assets that are not community property, Mrs. Chambers is allowed to keep 100% of the proceeds. A Notice to Creditors on Mr. Chambers apparent death was published in area newspapers on June 26, 2017. Also, on June 26, 2017, the Hunt County District Clerk received an Inventory, Appraisement, and List of Claims from Mrs. Chambers. (Many items appear to be undervalued in this Appraisement compared to the current market values.)
Why was this allowed? Why would she hurry to have her husband declared deceased?

On June 8, 2017, Texas EquuSearch conducted a ground search in the area of the 7000 block of FM 2101 in Quinlan. Although the search was thorough, no sign of Michael Chambers was found.

Mrs. Chambers obtained a Protective Order against her son, Justin Chambers, through the Hunt County District Court system on July 13, 2017. The exact reason is unknown. The Protective Order is in place for the next two years.

During a birthday party celebration on June 27th, Mrs. Chambers was at the home of family friend, Penny Edwards. She stated to Ms. Edwards that Mr. Chambers “was not coming back.” Ms. Edwards claims that Becca Chambers was stoic and adamant about her statement.

A red 1966 Mustang red convertible was sold to an out of state buyer on July 7, 2017. Mr. Chambers had given it to his wife as a gift at the end of 2016. The vehicle was in the name of a Chambers family member.

Mrs. Chambers expressed financial hardship soon after Michael’s disappearance. After a family discussion, it was decided that Mrs. Chambers would sell the 1966 Mustang. The other alternative was for Mrs. Chambers to file for a Death Certificate through the court system, and probate Mr. Chambers’ Will.

In the days previous to July 14, 2017, a local resident, Bradley Marion Dunn, made claims on social media that he had information on the Chambers’ case. Chambers family members spoke with Mr. Dunn during this time. He was encouraged to contact the Hunt County Sheriff’s Office.

On July 14th, Bradley Dunn met with deputies from the Hunt County Sheriff’s Office at a location near the intersection of Farm to Market Road 2101 and Rancho Road in Quinlan. Mr. Dunn, a career criminal, was said to be jittery and under the influence of some mind-altering substance. Mr. Dunn was arrested on scene by Hunt County Sheriff’s Office for having a handgun on his person. He was booked into the Hunt County Detention Center. He was also charged with a Motion to Revoke Probation. Mr. Dunn is currently in the custody of the Hunt County Detention Center, awaiting disposition of his charges.

The afternoon of August 25, 2017, law enforcement retrieved swabs from the floor of Mr. Chambers’ shop for control sample analysis processing at an independent lab. The results have not yet come back.

A realtor was observed taking photographs of the Chambers home on August 26th. The house is presumed to be on the market for sale.

Several searches for Mr. Chambers have been held since his disappearance. The Texas Department of Public Safety conducted an aerial helicopter search of the Chambers property and surrounding areas. Also, dogs were brought in from the Texas Department of Criminal Justice in Bonham. The dogs picked up Mr. Chambers’ scent, and trailed it to the roadway, but were unable to follow it any farther. Also, a sonar search was used on the pond across the road from the Chambers house, and even at Lake Tawakoni by TEQ.

At least two male subjects who acquaintances of Mrs. Chambers have been questioned by area law enforcement.

The Hunt County Sheriff’s Office has only responded to phone calls or emails from Mr. Chambers’ family sparingly. Despite numerous inquiries by family members, the Hunt County Sheriff’s Office has failed to request the iMessages for Mr. Chambers’ phone account from Apple. The call logs were previously given to HCSO by the family soon after Chambers’ disappearance. HCSO is refusing to deem the case as criminal, saying that no criminal acts have been committed. A private investigator was hired by the Chambers children soon after he went missing.

This retired fireman needs justice. It is unfathomable that this man was injured in his garage, then found a bike that no one can verify he owned and ride the grueling 20 miles to the bridge to commit suicide. He knew about his wife’s affairs, and there’s documented proof of it. What happened to Michael Chambers?

If you have any informtion about this case please contact the Hunt County Sheriff’s Department at 903-453-6800.